This update looks back at Dotfuscator CE adoption in 2016 and introduces the latest functionality included with the Visual Studio 2017 version.

2016 saw the fastest Dotfuscator CE adoption growth in its 15-year history, as measured by the number of unique users and the usage levels of those users. (Note, all analytics and graphics generated via on-premises PreEmptive Analytics.) 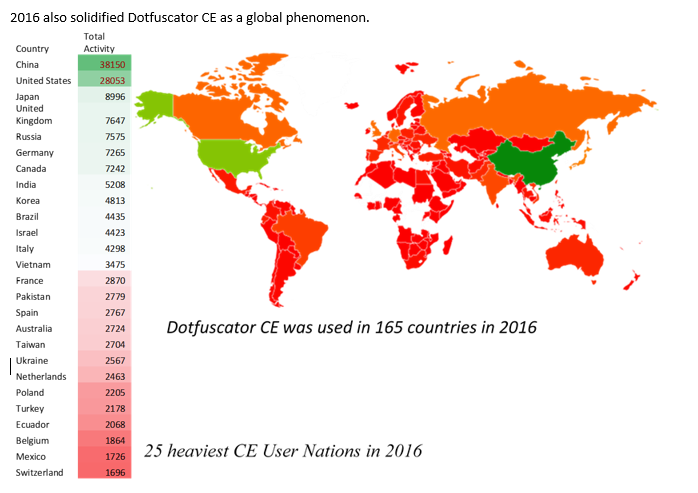 Command Line Interface (CLI). The CLI was added in the middle of 2016. It had been the single most requested new feature request for CE. This one feature increased the number of users to be sure, but its most dramatic impact was felt in how often each instance was run. The average number of sessions for a Dotfuscator CE CLI installation was 18X higher than an interactive (UI) Dotfuscator CE instance (~3 sessions per user for the UI version versus ~51 sessions per CLI version).

VSTS marketplace integration. We recently released a VSTS build extension for Dotfuscator CE, available in the VSTS Marketplace. You can read all about it in Bill Leach’s post Building in the Cloud with Dotfuscator Community Edition. Bill shows you how to:

“In the first 10 days of Dotfuscator CE Visual Studio 2017, 7.5% of registered (opt-in) users are hardening their Xamarin applications (for Android, iOS, and UWP).”

This is an exceptionally fast early adoption rate. You can learn more about Dotfuscator CE and Xamarin in Using Dotfuscator Community Edition with Xamarin – also by PreEmptive Solutions’ CTO, Bill Leach.

Anti-debug detection and defense: this powerful real-time protection prevents unauthorized use of a debugger in production (whether attached at startup or loaded later). Look for a Dotfuscator CE-specific anti-debug blog post from Bill in the coming days. Until then, check out my earlier post Anti-debug and Anti-tamper: more than just a powerful new feature. You can step through all of the instructions using a Dotfuscator Evaluation (with full support!) to get you jumpstarted.

More ways to find and install Dotfuscator CE. You can now choose how you’d like to install your copy of Dotfuscator CE – either through its inclusion with Visual studio workloads or via our website here.

Stay tuned for the next installment where we’ll likely cover native debugger detection and defense for both Dotfuscator Pro (available already) and CE (coming very soon!), which will help you protect your UWP apps.