Note There is an issue with Method 1 when working with solutions that include a library project. We recommend using Method 2 for all projects. Please contact support if you have issues or questions.

In order to assess which approach is right for you, we need to think about the build process for UWP applications. The following diagram illustrates the process of generating artifacts when choosing Store > Create App Packages... in Visual Studio.

All of the diagrams and instructions in this article assume that the following are true:

When building a UWP application to deploy to the Windows Store in this manner, two application builds are performed.

The first is the Store Build. The assemblies are compiled to IL, packaged in appx files, and archived together in an appbundle. The appbundle, along with other ancillary files, is packaged in an appxupload archive. This archive file is what you upload to the Windows Store. After upload, the Windows Store itself compiles the assemblies to native code suitable for the relevant target platforms.

The second is the Test Build. The assemblies are compiled to IL and then to native code with the .NET Native compiler. They are packaged in appx files and archived together in an appbundle. The appbundle along with other ancillary files are put into a directory whose name will be something like MyApplication_1.3.2.0_Test. Inside of this directory will be a powershell script that will help you sideload the native-code application. Because these assemblies are compiled to native code, testing this application will be most like testing what your customers will obtain from the Windows Store. We recommend integrating Dotfuscator into the MSBuild pipeline, because it is the easiest to setup and the easiest to use. It further allows you to easily test natively-compiled obfuscated code, just like your users will get from the store.

However, this approach currently offers somewhat less protection than running Dotfuscator directly on the appx packages post-build. In particular, the XAML (BAML) resources will not be processed for renaming. The next version of Dotfuscator will address this issue so that you will not have to turn off XAML transformation on your input assemblies when using the convenient MSBuild integration. At that time, this approach will be the clear choice over using Dotfuscator manually on the appx packages. UPDATE Version 4.21 of Dotfuscator supports XAML resources as part of the MSBuild pipeline, this is the preferred method going forward.

Find detailed instructions for integrating Dotfuscator into the MSBuild pipeline below.


Method 2 Overview: Use Dotfuscator on the appx packages Notice that the Test Build will not be obfuscated, because Dotfuscator cannot process native code assemblies.

Find detailed instructions for using Dotfuscator directly on the appx packages below.

When incorporating your UWP application into the MSBuild process, you should turn off Renaming and Removal until you have verified that Dotfuscator is, in fact, executing in the build process and that the resulting application is working correctly. Once you've verified this, you can turn Renaming and Removal back on and configure any exclusions that may be necessary.

Until there is a Dotfuscator release that processes your XAML (BAML) resources during the MSBuild process, you should uncheck Transform XAML on your UWP assemblies. This can be done on the Input tab of the stand-alone Dotfuscator UI: 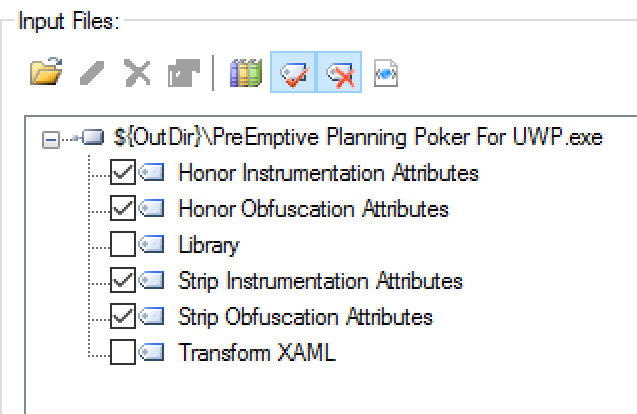 In each of your UWP csproj files, add a UsingTask reference to the Dotfuscator task:

Note that we referenced version 4 of the PreEmptive.Dotfuscator.Tasks.dll. Make sure that you are using the most up-to-date version of Dotfuscator you have (in case you have side-by-side installations of Dotfuscator).

Next, in these same csproj files, configure this Dotfuscator task to be executed during the AfterGenerateAppxManifest build target:

The AfterGenerateAppxManifest target will run before any native code compilation and before the packaging step in the Visual Studio deployment.

UPDATE As of Dotfuscator 4.21, you will want to include the $(OutDir) directory as the input. Dotfuscator will recognize the directory as an exploded Appx package, allowing it to properly update markup files.

In order for the UWP-specific build process to find the obfuscated assemblies, they have to be copied back into the original assembly locations after obfuscation. The easiest way to accomplish this is to configure a post-build event in the Dotfuscator project to do this copying for you:

UPDATE As of Dotfuscator 4.21, you will want to include the $(OutDir) directory as the input. Dotfuscator will recognize the directory as an exploded Appx package, allowing it to properly update markup files.

Once these steps are complete, you should be able to see Dotfuscator build output during your builds in Visual Studio or when running MSBuild from the command line.

Set MSBuild project build output verbosity to at least Normal in order to see Dotfuscator-related output. (The following image is from using Detailed verbosity.) In Visual Studio 2015, you can set this verbosity level under Tools > Options > Projects and Solution ‒ Build and Run.

You can now judiciously turn on Removal and Renaming. Minimally, exclusions will be required for classes and methods referenced in XAML and in the appxmanifest.


Method 2 Detailed Instructions: Use Dotfuscator on the appx packages

When you choose Store > Create App Packages... in Visual Studio, you will be asked Do you want to build packages to upload to the Windows Store?. The following instructions assume that you have answered Yes. This will cause the build process to generate both an appxupload archive suitable for upload to the Windows Store and a Test folder containing a version of the application suitable for sideloading. If you answered No, note that the build process will only generate the Test application for you.

The appxupload file is the file that is ultimately destined for the Windows Store. It contains an appx package file for every platform that your application targets. These appx package files contain managed IL assemblies.

In directory unbundled, you should now have an appx package file for each target platform as well as some other files.

The following instructions should be followed for each (platform-specific) appx file that will be protected by Dotfuscator.

First, open the Dotfuscator stand-alone UI. On the Input tab, add the appx package as the input for Dotfuscator.

If your appx is signed as part of the MSBuild process, you will need to configure Dotfuscator to re-sign it.

You can now configure the various Dotfuscator features (Renaming, Removal, String Encryption, etc.) as desired. Remember, though, it is best to get started with all of these features turned off to make sure that your general set-up is working properly. Then begin to turn on features one at a time so that you can comfortably adjust the settings for each feature (e.g. specifying exclusions in Renaming). If you are new to Dotfuscator in general, visit the Dotfuscator Quick Start Guide located on the Dotfuscator Support page to learn the basics.

After running Dotfuscator on all of the extracted appx packages, you should have an appx file for each platform in the Dotfuscator output directory (${configdir}\Dotfuscated by default).

Run the following command in the Developer Command Prompt for VS2015 (replacing ..\Dotfuscated with the actual path to your Dotfuscator output directory and using the actual name of your appxbundle):

With the proper path to your pfx file and the proper name of your appxbundle, run the following command in the Developer Command Prompt for VS2015:

You now have an appxupload that contains assemblies processed by Dotfuscator. It is ready to be uploaded to the Windows Store!

Choose Store > Create App Packages... in Visual Studio. This time, answer No to Do you want to build packages to upload to the Windows Store?. Also, choose the Debug configurations for all platforms.

Note that this is still not entirely the same as what your customers will get from the Windows Store. Their downloaded application will have been compiled to native code by the Windows Store. It is not likely for there to be discrepancies between the managed IL and unmanaged native assemblies, but there are still some things that are not handled properly by the .NET Native compiler; Microsoft recommends testing the native code version of your application. If you think that this discrepancy is a problem for you, then you should seriously consider Method 1.